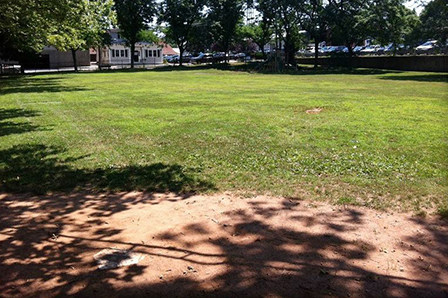 It all started in Luciano Park nearly 23 years ago, a humble little “Field of Dreams” for six-year-old girls in Westport’s newly founded Little League Girls Softball Instructional League, and LandTech was there from the beginning.

This year the Westport Department of Parks & Recreation, along with PAL, the Westport Police Athletic League and Deputy Chief Foti Koskinas have undertaken the much needed improvements to the field, including a new perimeter fence, softball backstop and dugouts, benches, turf enhancements and a few other special touches. Chief Koskinas recently approached Pete Romano to have LandTech design the field improvements.

Sue and Jeff White and LandTech’s Pete Romano were all instrumental in helping launch this league to teach softball skills to young girls. The league was originally the dream of Bill Meyers, the now legendary girls’ softball advocate. Jeff White was the League’s President, and Sue and Pete squared off many times on the field as coaches for the much-feared Chickadees and Lambs. The softball careers of their daughters Collen White and Christen Romano began at Luciano Park, along with Samantha Marpe, daughter of Westport First Selectman Jim Marpe. The girls went on to play at various levels of Little League and Premier Travel Teams and eventually Staples High School, where Colleen was a starting pitcher for the Wreckers and Christen was her catcher. They became team captains in their senior year, along with friend Christine Grimaldi, also a Luciano Park alum.

When Pete learned of the need for financial backing he thought of his friends Sue & Jeff who stepped up along with Pete and a few others to fund the improvements. The fond family memories of their daughter’s fun times at that field have made creating this little Field of Dreams a natural.